A few years ago wifey and I bought a Sony DAV-HDX274 from Costco because our DVD player had died and current receiver didn't have enough ports*. Its one of those All-in-one DVD/Receiver combos that in theory should only have a single cable going from it to your TV (hdmi), and your Cable/Sat box to it (optical or coax audio cable) for surround sound when watching Game of Thrones. It came with all the speakers and cabling needed all in one box, sounded decent and I think I paid under $200 (~3 years ago). The problem occured when we moved... we misplaced 2 of the proprietary speaker wires that have the special "DAV"** connector, so hooking it back up meant jerry-rigging or buying replacement wires for a ~3 year old receiver at ~$70... no thanks.

I had a gift card about to expire from Radio Shack and there I found these. Originally for a universal AC adapter/charger kit, they were almost an exact match for the pins on the back of the receiver. At under $5 each they were still a much better deal than the actual part. They were round on the ends as opposed to the trapazoid-ish shape the DAV connector was, so I used my Harbor Freight rotary tool to shave off some extra plastic. Next I spliced on some normal speaker wire, hooked up the center channel and sub and was good to go. They fit tight in the ports, sound as they should and are easily removable.

Here are pics after I shaved down some of the excess plastic. Even if you have to buy the rotary 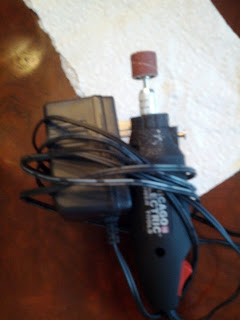 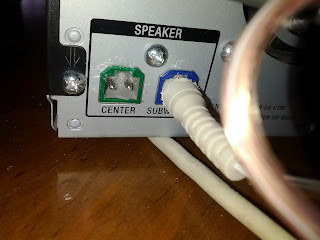 *Always get more ports than you think you need!