Yeah I know, 2 cooking posts in a row, who am I Kiss My Whisk?

Saffron risotto is likely my favorite prepared dish (warning I have a lot of favorite foods). The problem is saffron is so flipping expensive and doesn't go very far. But- other than online bulk buying, I may have found something locally(-ish) available at Costco. Honestly I don't remember what I paid but I think it was about $15/gram which is still far cheaper than the grocery store, if they even have it. The quality was great, and the color/taste was perfect. That was enough for about 4 saffron dishes (for 2 people with leftovers).
Short version of risotto cooking directions:
1 cup of short grain white rice (arborio)
~1/3 of a large white or yellow onion chopped fine
3 cups of chicken or vegetable broth (I prefer chicken)
Heaping tablespoon of minced garlic
~1/4 cup of shredded Asiago/Pecorino/Romano/Parmesan cheese (I mixed all of them)
Black pepper
dried chopped parsley
large pat of butter
2-3 tablespoons of Olive oil (doesn't matter what kind, no matter what Giada says)
pinch of Saffron (I guess technically I used about a 1/4 ounce, but if you can measure that you probably already know how to cook risotto)
-In a large sauté pan, start sweating the onion & garlic using all of the Olive oil and butter, once they are about 1/2 of the way to the point that you'd call them fully done, add all the rice and cook until golden-yellow-brown. After adding the rice it shouldn't take more than about 2 minutes.

-Now add about 1/4 of a cup of the broth while stirring slowly, add all the saffron at this point. Turn the heat down to low.

-As it gets absorbed add another 1/4 cup at a time until you have about 1/2 a cup left. At this point add about half the cheese, a teaspoon each of black pepper and parsley

-Once that is absorbed, serve and eat immediately, sprinkle the remaining cheese over the risotto after serving.

Honestly other than the constant stirring its really not that hard to make, and if you can buy the saffron in bulk (or otherwise cheaper) its not that expensive either.

Here are some pictures! 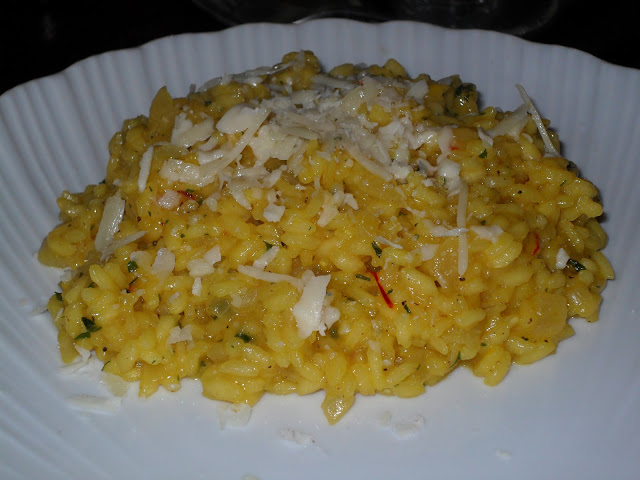 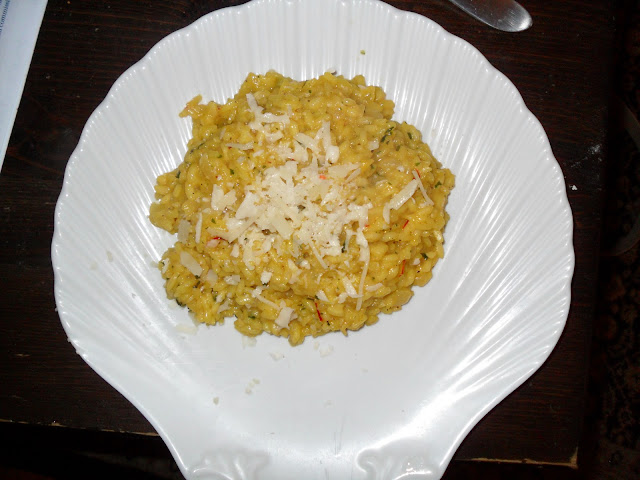