I'm of course referring the monkey. 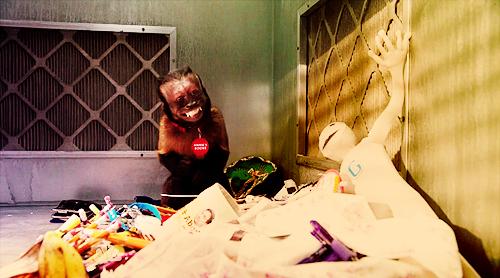 "Community" has essentially been on a kamikaze mission for a long time now, going up against "The Big Bang Theory" and one of "American Idol" or "The X Factor" for a while now. It aired after "The Office" briefly at the start of its first season and has had to go it alone ever since. "Whitney," which gets to stay on the schedule has done better entirely because of that "Office" lead-in, and has been bleeding viewers almost as quickly as it's been arousing critical pans. "Community" is a mess ratings-wise, but it's one of NBC's few shows that still draws largely unabashed love from critics. Pulling it off the schedule temporarily given the ratings is understandable; pulling it off the schedule while leaving "Whitney" on is not. Either show is going to do the same pathetic numbers on Wednesdays at 8 - away from its "Office" cocoon, "Whitney" could easily do worse than "Community" would - and one move at least buys continued goodwill from the press and viewers, whereas there's no who will be happy that ["Whitney"] continues to air, week after week.

Here's my opinion, Whitney (the show and the unfunny person) sucks. Lets not let a great, witty show share the fate of another great, witty show... Plus, my GOD Alison Brie is hot. (Still a fantastic show in its own right)

Email ThisBlogThis!Share to TwitterShare to FacebookShare to Pinterest
Labels: save community