I like to post about dishes that really stand out for 1 reason or another. This stands out for several. First its cheap, the ingredients you probably have in the fridge (or have something close). Its filling, which is good because I'm always hungry. Its healthy, it has Kale how could it not be? Lastly its really f***ing good.

A traditional Halloween Irish dish, Colcannon was originally made as a cheap year-round staple. It can be made beforehand, reheated or pressed into patties and fried into a pancake. It can be the main or a side dish and the best part is, it can be made from leftovers.

Leftover mashed potatoes
Some sauteed Kale (see below for that recipe)
Sauteed onions (yellow or white, You could try a purple onion, but I always find them too strong tasting)
Garlic - I used pre-chopped in that big container you get at Costco
White and Black Pepper
Thyme (I used dried)
Shredded Scallions/Leeks (I didn't have any so I didn't use any)
Pecorino/Asiago/Parmasean/Romano cheese - Just like in Olde Ireland! Although I don't see any reason you couldn't use any actually Irish cheeses.
Leftover crispy Bacon (When I usually cook Bacon for Breaky, I make a bunch and just leave it in the fridge)

Combine leftover Mashed Potatoes with the Kale and Onions (I used about 6 small potatoes worth, a large bunch of shredded then sauteed Kale and about 1/4 white onion) with a large spoon in a mixing bowl. Add a handful of crumbled bacon, shredded scallions/leeks to taste, a tablespoon of garlic, 1 teaspoon each of ground black and white pepper, a half teaspoon of ground thyme then mix into a paste. 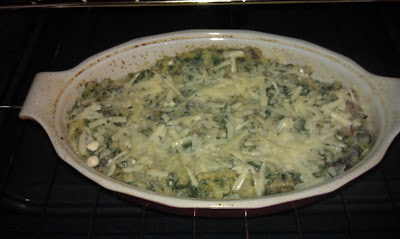 Then in a well buttered/Pam'ed/Olive-oiled baking pan, spread out that paste and cover with grated cheese, I didn't cover entirely, just a thin layer because the cheese will burn before the inside is hot (if you're cooking from fridge temp ingredients). You can always add more cheese later. You'll notice I didn't really add any salt for 2 reasons. That cheese can be really salty, and salt was used in the Kale. You can always salt to taste. 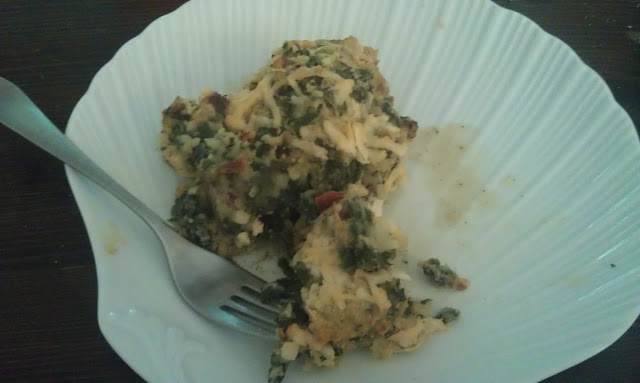 Eat like a Finnegan, then go farming, build something or do some kind of manual labor. 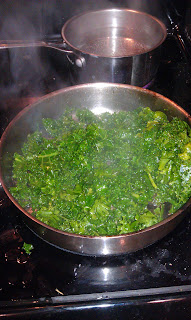 Sauteed Kale:
A bunch of chopped/rinsed Kale (regular, tricolor, whatever)
Put in a deep frying pan with a little bit of water and olive oil on the bottom, add some salt, garlic (powder or chopped) and drizzle some olive oil over it. Put on high for a few minutes and cover to start it steaming lower heat and toss around for another 2 or 3 min
stop cooking when its as bright green as this ----------->
----