Clean out the Fridge Monkey Bread

We are moving soon and I am trying to clean out the fridge of all the food we've bought and haven't eaten. We had a tube of cinnamon buns that I wanted to make into something other than cinnamon buns. I wasn't successful finding a recipe online so I kinda made one up using a monkey bread recipe. First I set the over to 350 degrees and Pam-ed a bundt pan. I opened the cinnamon buns and made about 8 cuts around the buns like wheel spokes. I put them in the bundt pan. Then I melted 1 stick of butter in the microwave and mixed in about 1/2 to 3/4 c. of brown sugar. I also added some cardamom and nutmeg. I drizzled the butter mixture over the bun pieces and put the pan in the oven. I cooked them for about 14 minutes, let it cool for about 5 minutes and then turned it out onto a plate. I added the packet of frosting that came with the cinnamon buns tho it wasn't necessary.

Then I had to pull Danny away from the plate before he got sick.


It's not the prettiest dessert ever created, but it was very tasty! 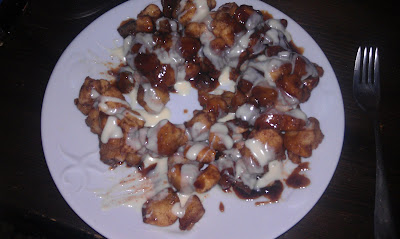