My favorite parts of the royal wedding were the quietly intimate moments that weren't meant to be seen by millions:
a. When William (love that name) entered the church, he took off his hat and gloves, at which point he tried to fix his hair. It was a moment that made the Prince seem human, when he was so concerned with how he looked, like before this he was so perfect until I saw this moment. Not to mention that he in a losing battle with the shower head, with each daily shower more strands are stripped from his royal scalp.
b. With each step down the aisle it looked like the Duchess of Cambridge was closer to tears, and when she said her vows each segment was said in a lower and lower voice until she was almost inaudible. Again it showed how it wasn't just a figure head that is larger than life, but she is an actual person. Love it!
c. http://katemiddletonforthewin.tumblr.com/ enough said. Follow them on twitter too, along with pippa_middleton@twitter. I have been cracking up from them all day.
d. I loved during the processional from West Minster Abbey to Buckingham Palace, everytime William saluted, Kate bowed. If you look closely, they are so well connected that when he drops his hands, she picks her head up. It was such a cute connection.
e. How could I forget the hats? To tell the truth my favorite hat ever is Camilla's hat fro her wedding to Prince Charles. I have a wedding to go to next month and I'm thinking about getting an ornate hat. Blue/green/teal flowy dress- Thinking white hat. Suggestions/objections welcome.
I have been so excited for this day since the announcement of the engagement. I made sure my 2 alarms were set for 5 AM and made chocolate chips scones the night before. I also set out my tea pot that is in the shape of a quintessential British Fish and Chips Shoppe! 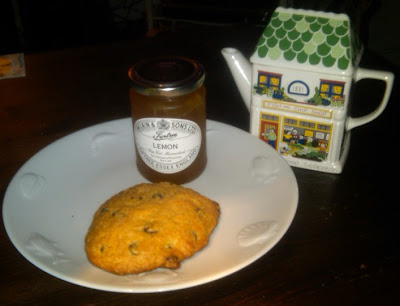 This is me in my Derby Hat! 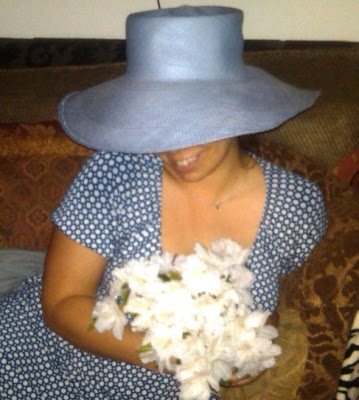