I got the idea for this a few years ago from a "Good Eats" episode where Alton Brown made a nomad stew (which I can't seem to find now). In the episode he used short ribs (or stew meat chunks I can't remember) but I had previously made then froze some extra venison meatballs, so I used those.

Here's what I did. Full disclosure, I don't really measure, I'm more of a "close enough" type of cook.

Ingredients list:
5 red potatoes
1 large yellow onion
1 rutabaga
1 bunch of leeks
4 carrots
4 parsnips
1 large clove of garlic, then probably some powdered garlic if you don't think you added enough
a 1/4 head of Radicchio (only because I had it and didn't want it to go bad)

dried powdered Paprika, although hot or smoked paprika could be good too
ground black pepper
Thyme
soy sauce
olive oil (only because the venison doesn't really have enough fat/grease in it, if using beef short ribs, etc this wouldn't be necessary)
a few tablespoons of left over bacon grease (I had broiled some bacon last weekend, this was the grease leftover from it)
Some Rooster sauce

4 large raw Venison meatballs (that has breadcrumbs, a egg, salt/pepper, rosemary, garlic and sage in it)

Chop up the first section of ingredients, toss in a bowl with a LOT of paprika, a tablespoon (?) of thyme, as much pepper as you think you can stand, a few "glugs" of olive oil, a squirt of rooster sauce and a little bit of soy sauce (maybe a table spoon? again, I don't really measure). Then take a ceramic baking dish and line with aluminum foil, make sure that a good amount is spilling over the sides, pam the foil. Place the meatballs into the corners of the dish so there is some space between them, and pour the spiced veges all over them. Then fold up the foil and crush it down so its all covered. Put in the oven at around 300 degrees for at least 4 hours.

It would be pretty hard to overcook this, but maybe check on it around the 4 hour mark. If the potatos/rutabaga seem tender (they require the most cooking) you're done. 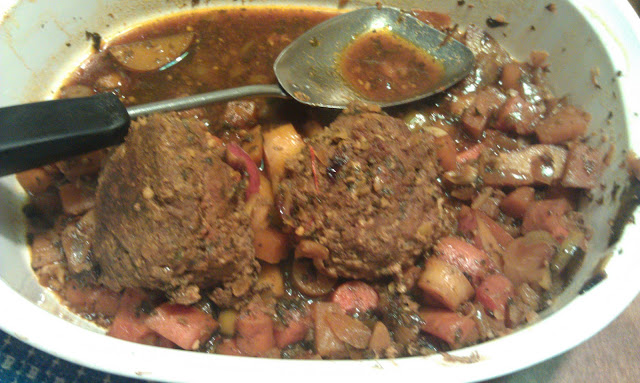