Wifey and I made this Ciabatta and Chorizo pizza the other day.

Its really easy to make too.

Ingredients:
Grocery store semi-baked Ciabatta (or other similar bread)
Fresh Mozzarella cheese, sliced up thin (shredded has no place on pizza IMO)
Another cheese or 2 to sprinkle on top (Pecorino, Asiago, Parmesan, etc)
sliced up, cooked sausage (in our case we pan-fried chorizo, but you could use nearly any kind)
Thyme
Oregano
Basil
Garlic
Some left over marinara sauce
Olive oil

-Slice the loaf lengthwise (so you have 2 large halves like in the picture)
-drizzle some olive oil over the non-crust side of both halves
-spread out some garlic and thyme/oregano/basil (if not dried) to taste all over the oiled bread
-If semi-baked, put in oven at 350 for 5-7 minutes then go to the next step, if fully baked go right to saucing
-Using a large spoon, spread out a thin layer of sauce
- add the sausage slices
- add slices of fresh mozz strategically places that when it melts/spreads out itll cover most of the bread
- sprinkle some of whatever other cheese you chose 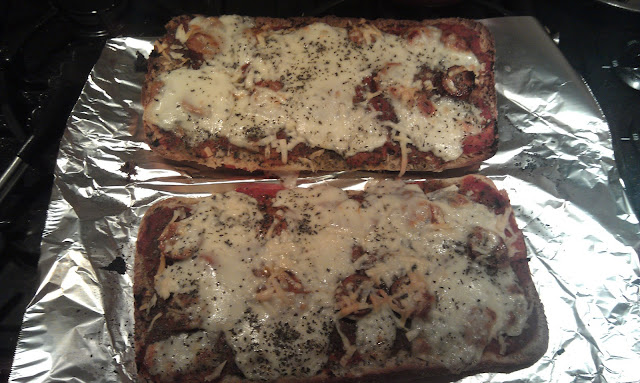 Email ThisBlogThis!Share to TwitterShare to FacebookShare to Pinterest
Labels: pizza