Bill Caswell the owner/founder/driver/head mechanic of "Caswell Motorsport" has just completed(?) his 2nd year in a row at the WRC Mexico Rally in his (what started out as a) $500 BMW rally car.

Below are some excerpts from his account of the events posted on Jalopnik, click the source link below for much much more.
----------------------------
I met him a year ago when I picked up Slocum at his house on the way to WRC Mexico 2010. He had his entire VW GTI in pieces on the floor and I was like wow that's a big project. His response, "it better not be, I am driving this to work in the morning." Hmmmm you need to stay in touch. (referring to his co-driver/co-mechanic)


On the way to opening ceremonies the car misfires so badly we can hardly maintain 40 mph and pull over. We play with a ton of stuff, call a friend Ben in Chicago, and eventually decide to disconnect the AFM and keep going in limp mode.


Then we came to a jump that didn't seem so bad. There was a nice VIP tent sitting next to it with a DJ and some people watching so I hit it fast in 5th gear. Easily 100MPH.


We were smart to bring our hood with us (we took our carbon hood with us so it wouldn't get taken, — not stolen, taken — for the stickers and to hang on their wall. The sight of three people on an ATV with two in fire suits carrying a hood over their heads seemed to amuse people. ) as our mirrors had been torn off the car when we got back. They had Caswell stickers on them.


We were only 4-5 seconds a kilometer slower than some real cars including Jourdain Jr and we were in a 20-year-old rear wheel drive, naturally aspirated car. I am ok with that but wish I could try a real car and see how it stacks up. Some day.


So I super-filled the engine with oil and it barely ran as I drove it into the holding area there was so much oil in the sump. Initially we rolled the car onto some huge rocks to put the crack higher and allow us to collect the oil leaking out and draining across the sandy skidplate. We didn't have a lot of options or a lot of oil and we were pretty far from the service park.
----------------------------------------
And buy some of his stickers! -> http://www.caswellmotorsport.com/store.html 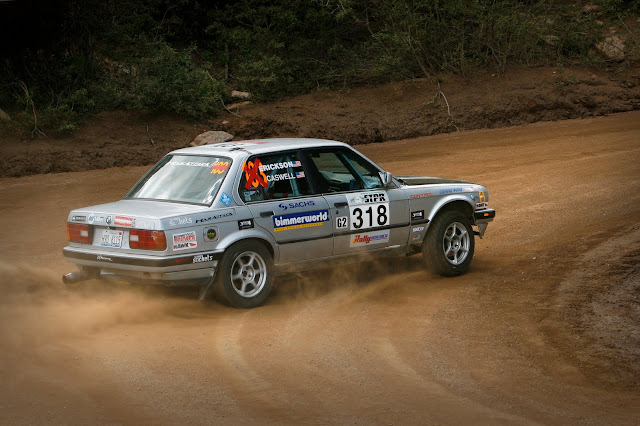