In the same theme as the post below, another British teenager has gotten a state-of-the-art bionic hand. This one funded by Mercedes' (the car firm) Formula 1 team.

[Formula 1 fan] Matthew [James], who was born without his left hand, put his plan into action by writing to Ross Brawn, boss of F1 team Mercedes GP Petronas, asking for £35,000 to pay for a top-of-the range artificial one. In return, the schoolboy said he would let the company sponsor the hand by putting the Mercedes logo on it – just like the adverts on F1 cars. Rather than being put off by the precocious advance, Mercedes was touched by Matthew’s ‘intelligent and moving letter’ and agreed to help him raise the money he needed. 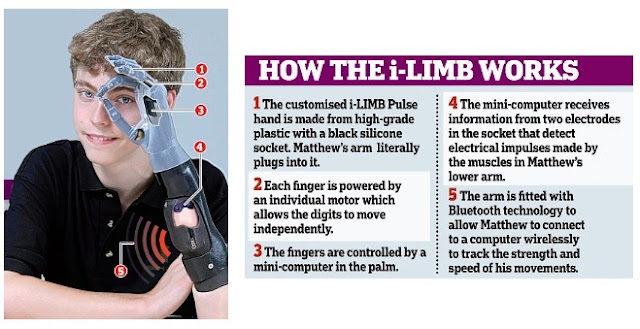 Between having his wish granted and this:
After receiving Matthew’s letter in June, Mercedes invited him to its headquarters, where he toured the factory and met racing driver Michael Schumacher.

A 14 year old Formula 1 fan has got to be extatic about the results.