Earthquake, right into a Hurricane 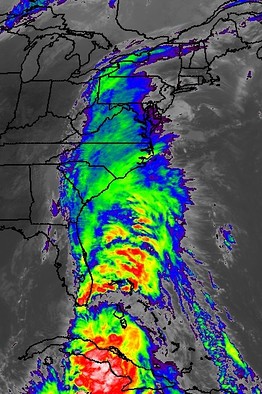 Theres a very real scenario that parts of the NYC subway system might not actually survive the flooding associated with Hurricane Irene.

Here's the past part of the WSJ article (linked below):
The last heavy rainfall event of this magnitude in August 2007 caused epic flooding throughout the subway system. In response, the Metropolitan Transportation Authority adopted various creative measures in a bid to keep the water out. For a stroll down memory lane, check out YouTube videos of past subway floods:


From Jalopnik:
To give you an idea about how bad this could be, some of the oldest pumps in the NYCTA system were bought second hand from the builders of the Panama Canal. I worked for the TA many years ago and even then the pumps were considered a serious problem. The Panama Canal was finished in 1914. If someone powered down all these pumps tomorrow, the entire subway network would be inundated in just a few hours. To give you an idea of how complex and massive this system is, it pulls 13 million gallons of water out of the subway on any sunny day. No rain. Not even a single drop of water from the sky.

If Sim city has taught me anything, we're up for an Alien or Monster attack next.

Its looking like Hurricane Irene will stay just far enough off shore to stay strong, and close enough to wreak havoc on every major east coast city from Wilmington, NC to Portland Maine...

As a Long Islander (where its slated to take a direct hit) I'm used to some heavy summer thunderstorms, but this is an entirely different level. There will be boats washing ashore, cars flooded, houses damaged and one should plan on losing power, possibly for a few days. One thing to remember, Hurricanes and flooding usually aren't covered by home insurance! Park your cars at higher elevation if you're near the water and do your best to seal up any known leaks while you still can.