I always say this

Most sitcoms (especially Seinfeld and Friends) have plots that dissolve with the presence of a cellphone. now finally somebody writes an article about it!

Brendan O'Hare — Many episodes of Seinfeld revolved around the four main characters attempting to find each other. There's no doubt that with cell phones and other modern technology Seinfeld would have been a lot different. Here are ten episodes that would be difficult to pull off with today's technologies.

1. The Boyfriend
This two-part episode is most famous for Keith Hernandez having a cameo as Elaine's new boyfriend. The funnier subplot in this episode, is George attempting to further his unemployment extension by saying he is close to a job with Vandelay Industries, a latex producer.
So as not to arise suspicion, George gives the unemployment office Jerry's number which will stand in as the number for Vandelay Industries. If you've never seen Seinfeld before, you should now be realizing that George is a short, stocky, slow-witted bald man. With the newfangled cell phones, George could have easily given his cell number instead of Jerry's home phone number. Eventually, Kramer picks up Jerry's home, ruining George's plan. George's pants fall down.

2. The Parking Garage
In probably the most obvious display of a need for a cell-phone, the four end up forgetting where the parked their car in a New Jersey parking garage. The four eventually split up to find the car, and then they lose each other. George and Jerry both get arrested for public urination, and Kramer and Elaine are left to look for the car on their own. I still wake up in the middle of the night with a cold sweat, hearing Elaine shriek "JERRRYYY!". It haunts my eternal soul.
Anyway, a simple text message would have allowed the four to get out of the garage, and George wouldn't have missed his parents anniversary. Worst of all, we missed out on seeing Frank Costanza, the greatest recurring character in anything ever.
3. The Keys
This three-part episode involves Jerry revoking Kramer's key privileges, Kramer going on an odyssey to Hollywood to pursue his acting career, and Kramer consequentially being charged with murder.
Jerry is also offered an appearance on The Tonight Show, and brings George along for the ride. They assume they will also find Kramer. When Jerry tries to contact Kramer, he is nowhere to be found. Of course, if Kramer had a cell phone, Jerry would have instantly come into contact with Kramer, ending the three part episode within the first twenty minutes. Buzzkill. 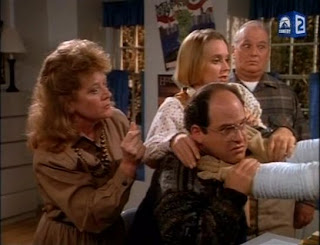 4. The Bubble Boy
Driving to George's girlfriend Susan's cabin house, Elaine and Jerry take a separate car from the couple. The two cars (Elaine & Jerry, George & Susan) end up making a pit stop at a coffee shop, where Jerry meets a man who has a son that lives in a bubble. This "kid" loves Jerry, and his father begs Jerry to come meet the kid. Elaine eventually guilts Jerry into going, and the two cars reluctantly are set off to meet the boy in the plastic bubble.
Jerry ends up getting lost on the way (a simple phone call/GPS search would have prevented this), and George arrives before Jerry and Elaine do. With a phone, George could have called Jerry and asked him how much longer he was going to take being lost.
George and Susan are then forced to play Trivial Pursuit with a rude, surly, plastic boy (but it does lead to the classic "It's MOORS! Not MOOPS!" scene).
5. The Movie
Another classic "Oh-What-If-They-Had-Cell-Phones!-This-Ruins-The-Episode-For-Me" episode. The episode centers around the four attempting to meet at one central location to see a movie. Jerry has a conflicting stand-up event, George gets in the wrong line, Kramer gets a Papaya King hot dog instead (I prefer Gray's Papaya. Once had 15 hot dogs and 6 drinks for 17 bucks. What a bargain!). Jerry attempts to run ALL THE WAY BACK to the theater to say he cannot make the movie, but the three others are gone. I think you know what technology would have done. 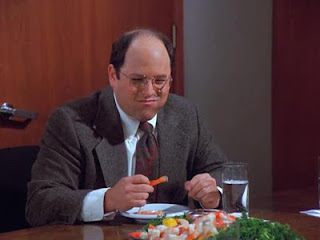 6. The Comeback
George Costanza is faced with a problem. He was just embarrassed by a co-worker who said "Hey George, the ocean called; they're running out of shrimp!". He just thought of the perfect comeback (The jerk store called. They're running out of you!"), but the co-worker has since been let go and is in Akron, Ohio.
George then flies out to Akron to deliver the line, where he of course messes it up.
He could have easily called the guy with his cell phone, told the joke, and been way more prepared. George is not exactly skilled in thinking on the fly. 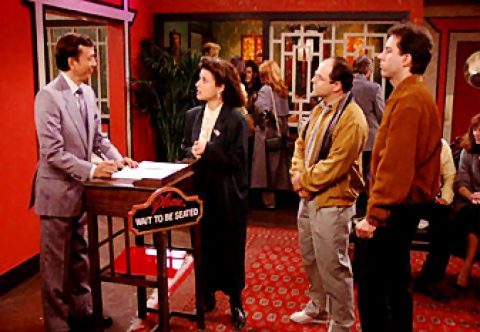 7. The Chinese Restaurant
As the title says, the story takes place inside a Chinese restaurant, notorious for being one of the worse places on Earth. The four find themselves in a never-ending waiting list, while the host of the restaurant keeps saying "5, 10 minutes" for their waiting time.
Again, George Costanza finds himself in a precarious situation. George needs to call his girlfriend, as they have agreed to at a specific time. Of course, George is forced to use a pay phone, but someone is hogging that. He eventually is able to call his girlfriend, but is forced to leave a message. She calls back shortly after, but the host says the call is for someone named "Cartwright".
8. The Pool Guy
To look at this from a different angle, this episode has the subplot in which Kramer has a similar phone number to that of the Moviefone guy. Kramer, being Kramer, adopts the persona of the Moviefone guy, and takes calls.
That could never happen today, as anyone with an I.Q. of 70+ either uses the internet or their phone to find out movie times. Does the Moviefone number even exist anymore?

9. The Muffin Tops
To once again look at this in a different angle, this episode was solely based on Elaine coming up with the idea for "Muffin Tops", which are of course a muffin without the bottom. Personally, I think this is a horrible idea, and ruins the point of eating the muffin in the first place. Just get a danish if you want the top half.
Since, the muffin top has become an actual food, and takes 35 minutes to prepare! Now, maybe the muffin top came as an offspring of Seinfeld, but it was bound to happen sooner or later.
10. The Finale
We've reached the end, and what better way to end the list, then to end it with the most polarizing Seinfeld episode of all time. As a weird subplot in the episode, Elaine is supposed to be calling her friend Jill, with her new cellular phone. Of course, the crappy 1990's phone has no reception, and Elaine eventually has to use her one phone call from prison on Jill. The prison phone call is, of course, the "king of calls".

Email ThisBlogThis!Share to TwitterShare to FacebookShare to Pinterest
Labels: Seinfeld