Seriously, how does this guy still have a career? 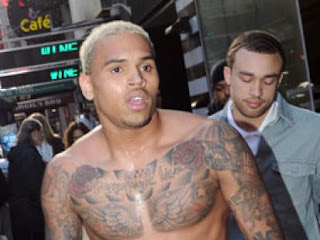 Chris Brown was on Good Morning America today.
Its a good thing that he's over it. I think thats what we were all waiting for.
Then when asked about his arrest for beating Rihanna he performed his "song" (lets not get into that now), stormed off to his dressing room aaaaand Keith Richards'ed the crap out of it. I guess his shirt took itself off in protest.
Don't you wish you could be as masculine as him?
I know I'm usually a GMA hater, but good show to Robin Roberts for setting him off. Maybe this'll be the last straw to the public actually scorning him for more than 5 seconds. (a guy can dream)
Source -> http://abcnews.go.com/Entertainment/chris-brown-storms-off-set-good-morning-america/story?id=13193040
Twitter response, keeping it classy as always.